This is Part 2 of the New Coke Case Study

Please refer to the New Coke Case Study (Part 1) for more instructions on how to structure the groups if you do not have groups of six students (which are needed for the role play participants).

There is also a collection of useful New Coke and Cola Wars videos on this site as well – and a summary New Coke Case Study video at the bottom of this page.

Let’s assume that among the marketing strategy solutions for Coca-Cola in 1985 was the strong consideration of introducing a new cola product (in some form) in the marketplace. As we know, Coca-Cola did in fact reformulate their flagship Coke product and relaunch it in 1985 – but was that the right decision?

Now it’s your turn to determine what would be the best product mix for the Coke brand, given the competitive marketing environment in the soft drink market of 1985.

Firstly, the New Coke product was to be positioned as new, exciting, modern and young; directly confronting the “Pepsi Generation” campaign and stealing Pepsi’s market positioning.

Secondly, the New Coke product tasted better which would stop the Pepsi Challenge taste-test advertising. In fact, Coke had plans to run their own taste-tests and run their own TV commercials in order to win back lost customers.

Therefore, you can see why Coke’s management was so confident, as they believed that they had boxed Pepsi into a corner and destroyed their competitive strategy, as highlighted in the following perceptual map. 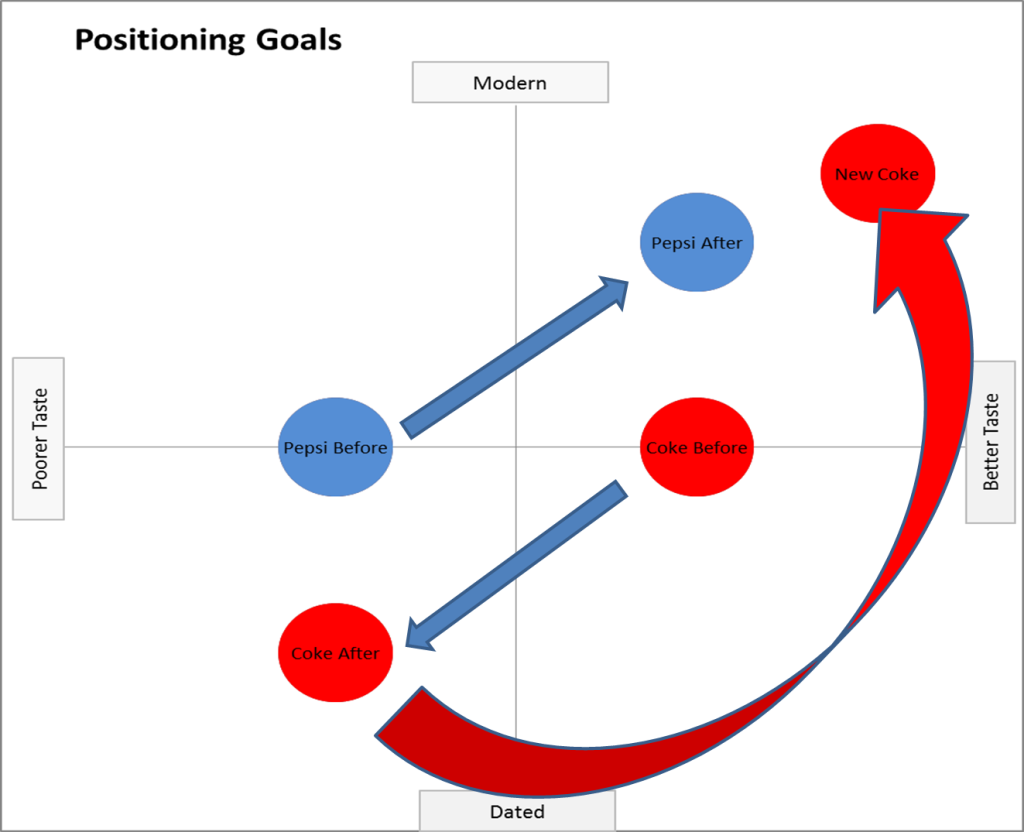 Your group needs to consider whether if and how Coca-Cola should launch a new product or whether there are better non-product solutions to their competitive battle with Pepsi. Here are the different approaches to a new product to consider and discuss in your groups.

A. Develop a NEW product

B. Do NOT develop a new product

C. Do nothing different

Note: Remember to discuss these questions in the role play scenario; please see the other New Coke Case Study for participant role descriptions.

In this set of activities, students download a free Excel template to run the GE matrix, in order to understand…

Students are presented with an excerpt from a monthly ‘performance’ one-on-one meeting. Who is at fault? How can this situation…

This mini case is for a hotel chain who have conducted a customer satisfaction survey. Given these research results, what…

Given the continued level of interest in the "new" Coke 1985 product replacement, this is a video-based student activity based…

Services have a number of distinct characteristics that create a unique set of marketing challenges for services marketers. The task…